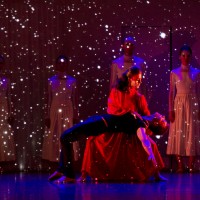 The classical music repertoire of the company, founded in 1987, consists of theatrical dances based on the works of composers such as Tchaikovsky, Stravinsky, Bartók, Orff and the company’s varied repertoire also contains choreographies composed to musical montages.

In the story of The Wooden Prince by Béla Balázs, the love of two young people can be consummated only after serious obstacles have been overcome. Through the enchantment of the Fairy, their path is obstructed by the forces of Nature, which keep them apart until they are freed from the false formalities that conceal their true worth. This moral story, in which the purest ideal of love can be reached only by looking painfully deep into ourselves, is elevated to a philosophical level by the music of Béla Bartók.