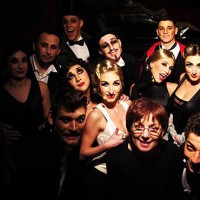 “It’s a vivifying breeze that this Hungarian company risks to blow above your head. They simply step on stage and the temperature immediately climbs !” À Nous Paris

Recirquel Company was founded in Budapest in 2012 by director and choreographer Bence Vági. His vision for a new form of circus in Hungary drew on a long tradition. Hungarian classical circus dates from 1800, and Budapest was the site of one of the oldest circus schools in Europe, established in 1950. With Recirquel, however, Vági’s aim was to develop a unique, permissive expression of Eastern–Central Europe’s cultural heritage that would narrow the distance between physical theatre, dance and circus – and to introduce this new genre of contemporary circus to the world.

Recirquel’s first show, Night Circus, premiered in the spring of 2013 and was an overnight success. The young company not only attracted appreciative audiences, but also gained practical support from Hungary’s leading cultural institution, the Palace of Arts – Müpa Budapest. Csaba Káel, Müpa’s CEO, played an important role in providing a home for the new circus in an institute that was best known for hosting performances of classical, jazz and world music, and dance. The company has presented all its subsequent productions at the venue.