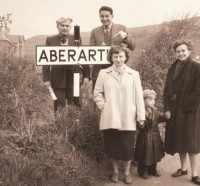 Entry at the Cafeteria

The 50th Anniversary of the Hungarian Revolution was commemorated in 2006 throughout the world. Following the Revolution some 37,565 Hungarian refugees/immigrants arrived and made their new home in Canada, enriching this country’s rich multicultural tapestry.

The Rakoczi Foundation, in partnership with the Multicultural History Society of Ontario, jointly launched an Oral History Project to collect, organize and preserve the personal stories and archival materials of these immigrants who came to Canada between 1956 and 1958 as a direct result of the Hungarian Revolution.

The focus of the program was for second and third generation descendants of these immigrants to interview their relatives: mothers, fathers, grandmothers, grandfathers, aunts, uncles, etc. about events that unfolded in 1956 and its aftermath. Interviews were done in Canada’s official languages as well as in Hungarian. These completed interviews and archival materials have now been catalogued and submitted to the historical website of Multicultural Canada www.multiculturalcanada.ca/collections.

Based on the above research, a National Exhibit, Hungarian Exodus, L’Exode Hongrois, then, under the distinguished patronage of Her Excellency, Michael Jean, Governor General of Canada has been created encompassing the submitted material.

The physical exhibit contains 18 self-standing panels arranged in thematic order depicting pre to post events of refugees from Hungary to Canada. Since September 2006, this National Exhibition continues to travel across Canada, in both official languages, displayed at museums, libraries, universities and public areas of government buildings. The Canadian Embassy in Budapest requested an exact replica of the Exhibit, which is traveling in Hungary at conferences and universities, telling Hungarians about Canada’s outstanding contribution in accepting the Hungarian refugees.

During 2016, the 60th anniversary, multiple events are already in progress from Halifax to Vancouver further emphasizing to Canada and the world what Hungary and Hungarians did for “freedom”. It is also our way to THANK Canada and its citizens for their open generosity towards accepting Hungarians.