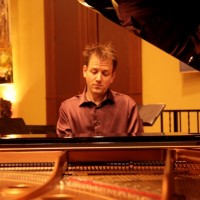 Intriguing, exciting original compositions by Attila Fias, along with inspired interpretations of Hungarian folk songs and music by Béla Bartók.

Attila Fias is an award-winning, Hungarian born jazz pianist, composer and arranger based in Toronto. He is a versatile musician, whose playing has been called pyrotechnic, stunning, playful and sophisticated by the Toronto Star, Wholenote magazine and Exclaim magazine. His special blend of sounds from across the globe reflects his rich and varied musical background with influences from Hungary, Brazil, Cuba and India.

With over 100 different internationally distributed albums to his credit, Attila has several gold and platinum records, and has recorded three albums of his original material. His latest album called “Ride” will be released in October 2016. He will be joined by virtuoso bassist Scott Kemp and multifaceted drummer Richard Brisco.