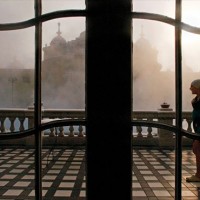 Otto Kaiser began his career as an illustrator, and then worked as a studio photographer. He learned photography in small town studios and he worked for several weekly magazines published in Hungary. Mr. Kaiser has made various shooting situations: portraits, landscapes and city photos. He was also interested in Hungarian cultural life in trans-border areas. The photographer has published almost forty photo albums. In 2009 he was awarded the Gold Cross of Merit of Hungary.